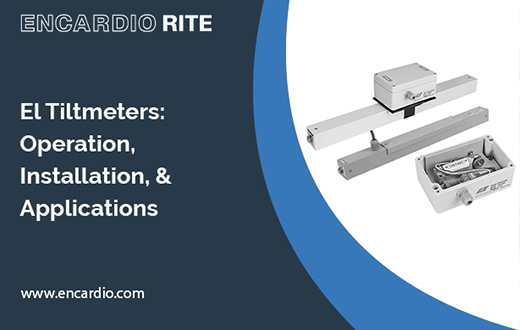 Old monuments or structures often get deteriorated with time and, it’s pretty crucial to carry out their routine health check-ups. Structural health monitoring is an important aspect of geotechnical monitoring and, it utilises various instruments for the same.

What are El Tiltmeters? 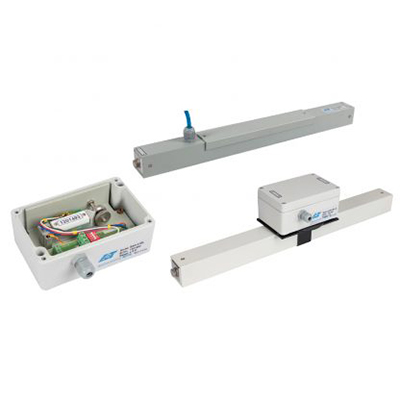 Electrolytic level type tilt meters are used to measure very small amount of tilt. Encardio Rite’s Model EAN-31EL tiltmeter is suitable for monitoring minute changes in inclination and vertical rotation of structure at a point. It is a high resolution tiltmeter with a rugged construction.

The tilt meter monitors deflection and deformation of structures such as high rise buildings, retaining and diaphragm walls, etc. Tilt changes in structures may be caused due to construction activities such as excavation; tunnelling and de-watering that affect the surrounding ground that supports the structure.

Changes in tilt may also take place because of loading of a dam during impoundment, loading of a diaphragm wall during excavation or loading of a bridge deck due to wind and traffic.

Data from electrolytic tiltmeters provides early warning in case of an emergency so that preventive measures can be taken on time.

The Encardio Rite Model EAN-31EL tiltmeter is contained by an aluminium die-cast enclosure and is generally used as a standalone unit for measuring tilt. It is either installed directly on the structure whose tilt is to be monitored (using mounting brackets) or fixed to horizontal or vertical beams.

The Model EAN-31EL, electrolytic tiltmeter can be mounted on 38 mm x 38 mm hollow square aluminium structural sections (beam). The length of the beam is known as the gauge length and is supplied with suitable mounting hardware for fixing onto concrete or brickwork structures.

The Encardio Rite Model EAN-31EL-B beam sensor is an EAN-31EL tilt meter mounted on a beam of specified gauge length and suitable mounting hardware for fixing the beams to the structure.

The El tiltmeter utilises a bubble level sensor similar to the one used in spirit levels. The only exception is that in this case the spirit is replaced with an electrically conductive fluid known as an electrolyte.

In EAN-31EL, the glass vial of the spirit level is replaced with a more thermally stable and dimensionally accurate ceramic housing. The ceramic electrolytic bubble level sensor has three terminals and acts as a resistive half-bridge circuit.

The variation in the ratio of resistance between the middle terminal and the two end terminals can be measured using an electrical half-bridge circuit. In a half-bridge circuit, the indicator/data logger applies a voltage across the end terminals and measures the output voltage between the middle terminal and one of the end terminals. Unfortunately, as the electrolyte used in the sensor deteriorates irreversibly (if a dc voltage is applied across its terminals), a pure ac excitation voltage source is a must.

In El tilt sensors with raw output option, the bubble level sensor terminals are directly available across the output terminals. Whereas, in tiltmeters and beam sensors with voltage output option, a signal conditioning card converts the half-bridge bubble level sensor output to a proportional dc voltage with a nominal full-scale value of ± 1 V DC.

Tilt sensors with a measurement range lower than 1° are very sensitive sensors and are easily influenced by even small vibrations that appear as noise on the output.

These sensors should, as far as possible, be mounted at locations where expected vibration levels are quite low. To exploit the full sensitivity limit of these sensors, some kind of averaging facility should be available in the readout unit or data logger used for monitoring.

| Read More: What Are Tiltmeters And Where Are They Used? |

How are El Tiltmeters Installed?

The electrolytic tiltmeter Model EAN-31EL is housed in a weatherproof die-cast aluminium box and can be fixed to any structure either directly using 4 mounting screws/fasteners or a mounting kit that allows more flexibility.

The beam sensor model EAN-31EL-B consists of an EAN-31EL tiltmeter together with a 38mm x 38mm square hollow aluminium structural section (beam) of a specified length. The tiltmeter may be factory fitted on a beam or the two can be supplied separately for assembly at site. Standard beam lengths are 1m, 2m and 3m but customer-specified beam lengths between 0.5 m to 3m are also supplied.

The beams can be fixed either horizontally or vertically as desired depending on the kind of tilt to be measured. The sensor mounting bracket on the beam allows the tiltmeter to be rotated by 90º so that the tiltmeter can be mounted in a horizontal position, irrespective of the orientation of the beam.

The tiltmeter and the beam sensors can be mounted directly to the anchors on wall or floor using the mounting angles or brackets supplied along. However, if the structure is likely to deform in directions other than the rotational plane of the beams, the use of components supplied in the optionally available mounting kit will give precise results.

A couple of mounting kits are required for mounting an individual beam sensor.

The nuts and washers supplied are assembled on the respective studs from which the correct position of these components during assembly can be noted.

Depending on the monitoring requirement, the tiltmeter can be mounted in two different ways as described below.

Rotation expected in the plane of the wall

If the structural rotation is expected to be in the plane of the surface of the wall, the tiltmeter is mounted directly on the wall using the wall-mounting bracket. The use of wall mounting bracket allows coarse levelling of the tiltmeter and the alignment of the anchors need not be very precise. 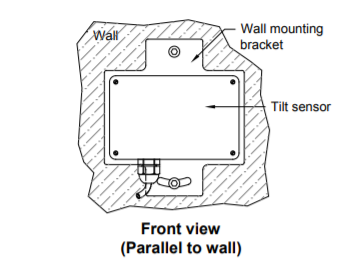 The wall mounting bracket is fixed to the wall using any commercially available 8 mm anchors/fasteners suitable for brick or concrete wall.

Rotation expected in a vertical plane perpendicular to the wall

If the surface of the wall is expected to rotate in a vertical plane perpendicular to the wall the tiltmeter should be mounted in an orientation as shown in the accompanying figure. The use of a mounting kit is recommended as this allows easy adjustment of the tiltmeter orientation. 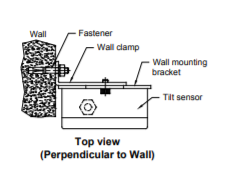 The EAN-31EL tilt sensor is mostly used for standalone applications where only the change in tilt or rotation of the structure is to be measured. The tilt sensor enclosure can be directly mounted on the structure by using two mounting screws or, more often, by using a suitable wall mounting bracket that allows some degree of rotational adjustment to orient the tilt sensor in a true horizontal position. The use of a wall-mounting bracket allows easier drilling of mounting holes as very precise hole locations are not required. 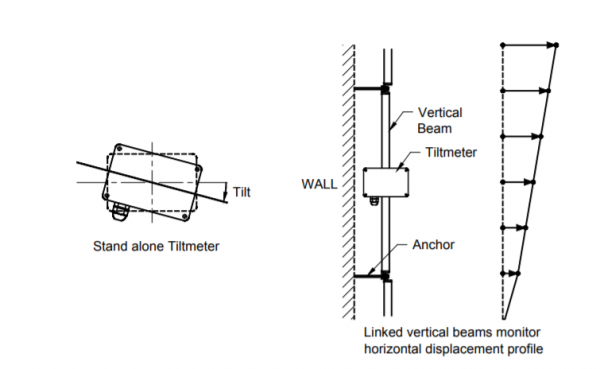 The EAN-31EL tilt sensor is also used with vertical beams of known lengths to determine the horizontal displacement of walls etc. In most cases, a series of linked beams are fixed to the wall vertically using a series of anchors. The distance between the anchors is known as the gauge length. Two adjacent beams in the link share the same anchor.

When beam sensors are used in an array, plotting the individual displacements against the gauge length of each beam yields the displacement profile as shown in the figure below.

However, the use of a uniform gauge length will give satisfactory results for most applications. The sensor beam lengths in the figure are shown as L1, L2,… L7 and the corresponding displacements measured by each sensor are shown above as d1, d2, ..d7.

The El Tiltmeters are used:

This was all about electrolytic tiltmeters and beams sensors. If you have a suggestion to make or a question to ask, feel free to drop your comments below and, we would love to answer them.