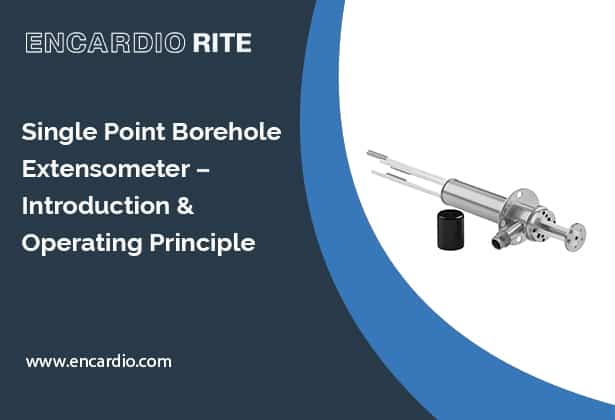 Encardio Rite single point borehole extensometer is a geotechnical instrument devised to assist civil engineers and geologist in the measurement of deformation of rock mass and adjacent or surrounding soil. Coupled with anchor bolt load cell and tape extensometer, it makes for an essential piece of equipment for the complete monitoring of foundations, slopes & embankments and for studying the behaviour of rock around underground cavities, tunnels and mines.

Let’s have a look at the application of borehole extensometer.

As discussed, borehole extensometer determines the displacement taking place in a borehole with reference to time.

Once installed, the single point borehole extensometer successfully measures the distance between the anchor (1) and the reference plate (5.8) and monitors it with time.

Assuming that the anchor is in the stable ground, any change in the spacing of anchor is understood as a movement of sidewall or slope, sag of roof bed, settlement of foundation etc. 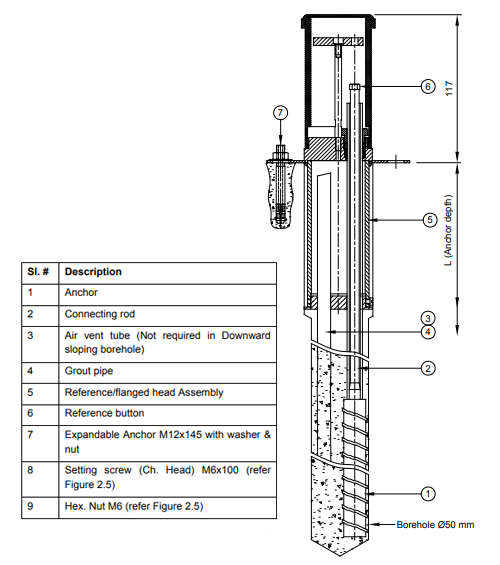 Encardio Rite Model EDS-64U/D is a mechanical borehole extensometer in which a single anchor is positioned in a borehole. The relative displacement is then measured over time with respect to a reference plate.

The model is especially efficient to measure the displacement when it comes to borehole with easy access to the mouth. It becomes economical and reliable to use the single point extensometer rather than any other.

A micrometre depth gage is used to capture the displacement reading by measuring the depth of the reference button at the near end of connecting rod from a reference plate.

A borehole extensometer is comprised of three major elements:

The image below explains the parts and the reference head assembly. It is installed in a borehole of φ 50 mm. The diameter of the mouth of the borehole is then expanded to 2 mm up to a depth of 200 mm. The flange consists of four 15 mm diameter mounting holes at a PCD of 105 mm.

The rod assembly consists of a stainless steel/fibreglass rod of specified length shielded inside an outer PVC tubing or continuous nylon tube. The rod is equipped with two ends connected, with one end having a male thread which goes into the anchor. The other end fitted with female thread is reserved for the reference button.

Even while grouting, the stainless steel/fibreglass rod and reference button are free to move inside the outer tube casing.

NOTE: Fibreglass rods are more compatible in vertical upward holes as compared to downward holes. When installed in a vertically upwards holed, the rod remains in tension whereas in downward holed, due to compression may result in sagging or buckling.

Longer the extensometer, greater may be the sagging or buckling. Similarly, shorter the extensometer, better is the accuracy of the measured displacement. Therefore, in deeper boreholes, it is advised to use stainless steel rods owing to their rigid characteristic.

Design Engineer should make a note of the field condition and measurement accuracy before deciding the type of connecting rod.

Actual performance of rods is determined by site conditions and it is recommended to conduct some field tests to arrive at a proper conclusion.

Another very important element of borehole extensometer is the Anchor.

Groutable anchor can also be installed in vertical boreholes or holes inclined upwards. However, special precautions must be taken to block the grout from flowing out of the borehole.

In the case where the groutable anchor has to be installed in a deep borehole, it becomes important to grout in stages. This may require some modification in the design.

NOTE: Encardio Rite uses the convention that depth of anchor is calculated as the distance from the mouth of the hole to the near end of the anchor.

This brings us to the end of the single point borehole extensometer introduction and operating principle. If you have any questions, feel free to comment below.