One Za’abeel Mixed-use is a famous project that is currently under construction in Dubai, UAE. Located between the Dubai World Trade Centre and Za’abeel Park, the One Za’abeel project comprises of two towers – Tower A and Tower B. Tower A has a height of 305m and 69 levels, including residential apartments, offices, a large retail area, high-end restaurants, and ultra luxury hotel spaces 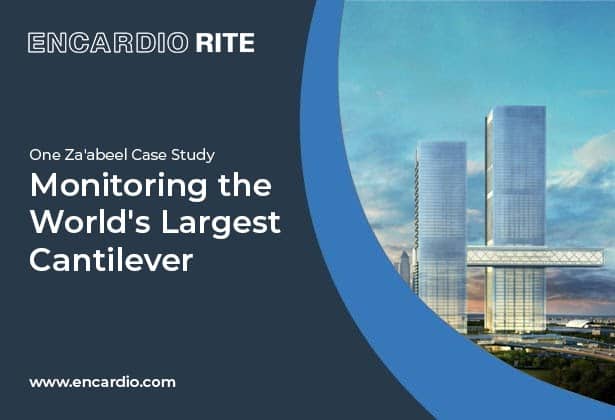 One Za’abeel Mixed-use is a famous project that is currently under construction in Dubai, UAE. Located between the Dubai World Trade Centre and Za’abeel Park, the One Za’abeel project comprises of two towers – Tower A and Tower B. Tower A has a height of 305m and 69 levels, including residential apartments, offices, a large retail area, high-end restaurants, and ultra luxury hotel spaces

Structural Health Monitoring of concrete structures helps to avoid any potential accidents and threats to the safety of both lives and properties.

Geotechnical Monitoring and Instrumentation are essential during the pre-construction and post-construction periods.

In this article, we take a look at monitoring during lifting of the link bridge at the One Za’abeel ICD HQ Project.

One Za’abeel Mixed-use is a famous project that is currently under construction in Dubai, UAE. Located between the Dubai World Trade Centre and Za’abeel Park, the One Za’abeel project comprises of two towers – Tower A and Tower B. Tower A has a height of 305m and 69 levels, including residential apartments, offices, a large retail area, high-end restaurants, and ultra luxury hotel spaces. On the other hand, Tower B has a height of 240 m and 59 levels, entirely dedicated to residential apartments.

However, what makes the project iconic and an engineering marvel is

“The Linx”. It is a suspended bridge that connects the two towers at 105m above the ground. Known as the world’s largest cantilever, The Linx measures almost 230 m in length with a cantilever of 66 m projecting from tower A, spanning in the middle of the towers. It has a cross-section of 18m2 with four levels offering various attractions, restaurants, lounges with a viewing deck, and a swimming pool on the roof.

Encardio Rite was entrusted for the entire monitoring work during the complicated lifting and installation of The Linx that weighs more than the Eiffel Tower! 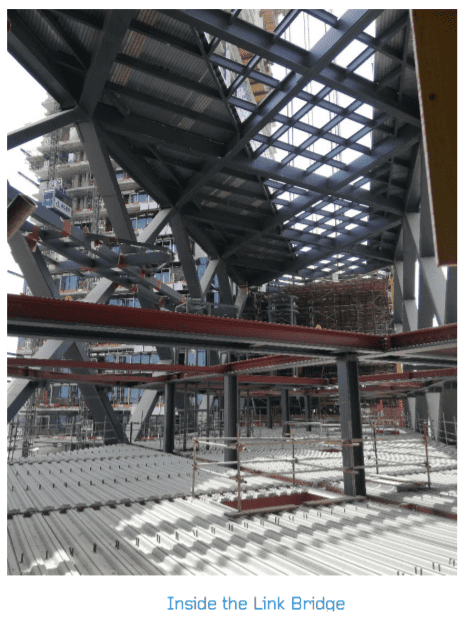 The Monitoring of the World’s largest Cantilever included a complex instrumentation & monitoring regime that consisted of precise recording and near real-time transmission of horizontal & vertical deformations and geotechnical parameters during the construction process. This was done to monitor and detect any unexpected behaviour of the building well in time. The results were sent to the client in real-time during the lifting of the installation process.

The Link & Its Lifting in Numbers

Length of the first section: 192 m

Length of the second section: 34 m

Weight of the second section: 900 t

The One Za’abeel Monitoring Project required a high degree of automation for the instrumentation & monitoring part because the measurements had to be uploaded in real-time to the client’s FTP server. Encardio Rite successfully implemented unique I&M approaches in terms of hardware and software to obtain the best possible accuracy and telemetry speed.

Encardio Rite installed four Leica TS16 fully automatic total stations with 1’’ accuracy along with the Terramove Control Boxes. These worked and communicated the finding of the total station’s measurements after each cycle to the Terraweb database. The four completely automated 3D deformations monitoring systems were placed on four pillars on each side of the two towers. The monitoring system was entrusted to measure the 3D optical targets that are located on the North & South sides of the two towers as well as the gantries of both the towers.

However, the four systems were not enough to cover the link bridge as the position of the 3D optical targets installed on the bridge would change continuously as the lifting progressed. During the monitoring of the Link Bridge, Encardio Rite employed two semi-automated systems, that were located on the RTA bridge, throughout the lifting procedure. 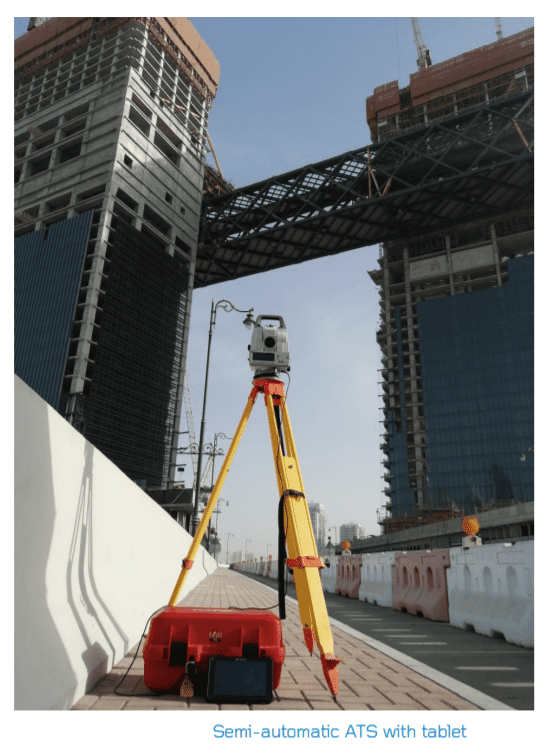 The two semi-automated systems managed to lift the telescope of the instruments, as per their operator’s request, to locate the 3D targets installed on the Link Bridge being lifted. This allowed enough time for the completion of the measurement cycles.

At the end of the measurement cycle, the two tablets connected automatically to the internet to send an email to the Terraweb database with the updated results.

Encardio Rite developed software for the project that transformed the received and processed data from the Terraweb database to send it directly to the client’s FTP server in the requested format. Within 2 minutes of the reading cycle, the processed data was available in Terraweb’s database as well as that of the client. 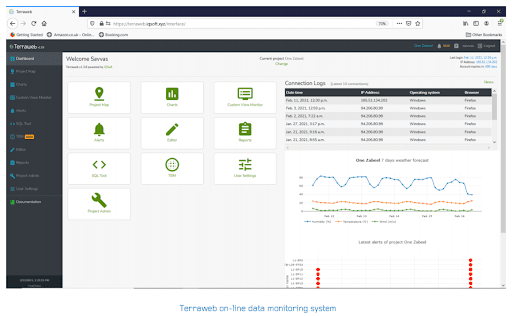 Encardio Rite started the installation of the prism targets on the two towers and the Link Bridge in early July 2020. Tower A included fifty-four (54) numbers of 3D prism targets, including 20 numbers in its gantry. 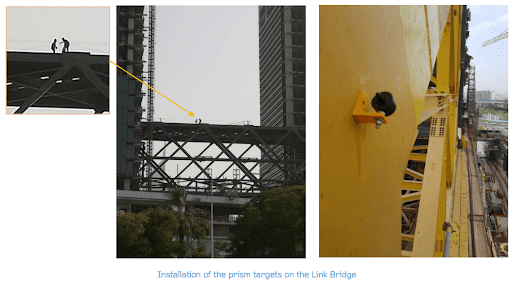 Tower B included forty-eight (48) numbers 3D prism targets, including 10 numbers in its gantry. The Link Bridge, 44 number 3D Prism Targets were installed during phase 1, and an additional 12 numbers for the lifting during phase 2.

Encardio Rite accomplished the challenging task by following the safety protocols, and in time, thanks to the installation team’s extensive experience.

The Monitoring of the World’s Largest Cantilever

During the pre-lifting period, from August 15, 2020, onwards, all the ATSs were programmed to measure the building’s targets every one hour. A baseline reading was formulated and the readings collected were automatically uploaded to the client’s FTP server. 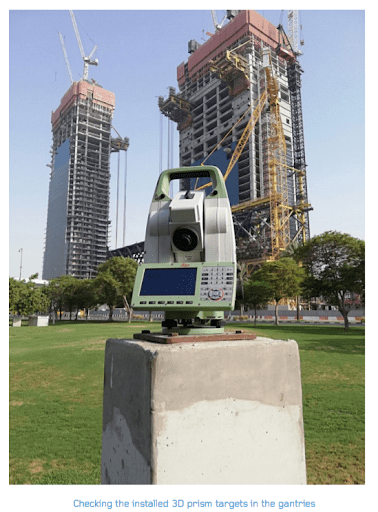 During the lifting, Encardio Rite has remote access to the operation. The readings were obtained using automatic and semi-automatic machines as per the client’s requirements. The readings were uploaded to the databases after each monitoring cycle, on a 24 x 7 basis. The monitoring was successful with the help of relentless support by the teams in UAE, India, and Greece. 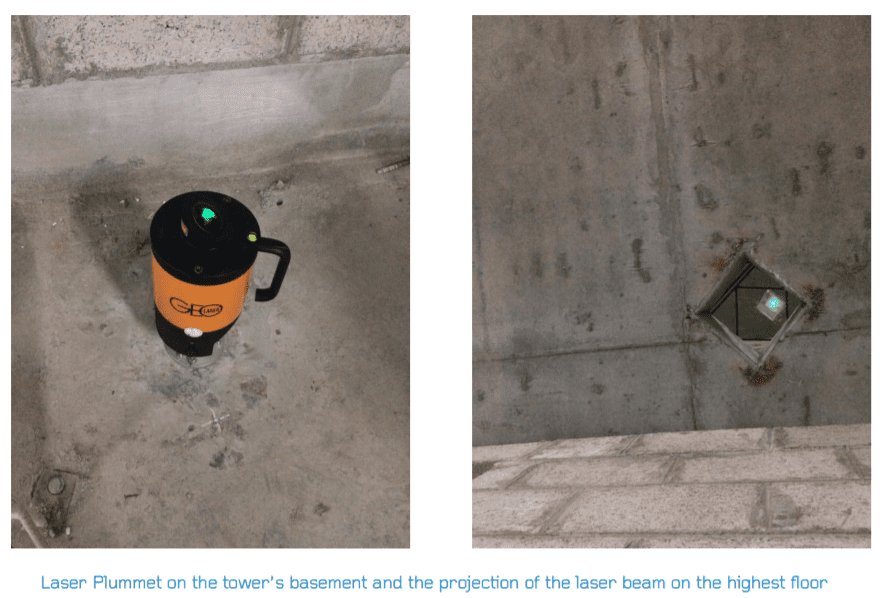 Similar to the 3D deformation monitoring by automatic and semi-automatic machines, monitoring of the horizontal movements were carried out on each of the towers with the help of a laser plummet. A plummet was placed in each of the tower’s lowest basement where the measurement was being taken using its beam up to the highest accessible slab.

The slab opening in both the towers enabled the transfer of the known coordinates of the bases of the laser plummet, to all constructed levels and use them as reference points. The laser beam position was recorded in the installed grid plates, and the graphs of the movement of the slabs with time were presented.

This was carried on for both the towers, every day, after the lifting procedure. The X and Y movement graphs were produced in the local coordinates system.

Encardio Rite’s reliable and robust world-class instruments and expertise made it possible to monitor a complicated lifting operation with the required accuracy and meeting all the deadlines to the satisfaction of all stakeholders.

The monitoring data was made available in real-time, with meaningful information, warnings, and alerts. The combination of rugged sensors, advanced data collection, transmission, web-based data monitoring service and an advanced and experienced team made it all possible.

The output from the monitoring operation assisted in reducing risks, protecting existing assets, and boosting confidence in the lifting process.

The role of instrumentation and monitoring in the project was not limited to design optimization and construction control, but was also to ensure the safety and stability of work at the construction site, and of the infrastructure within the zone of influence.