In today’s age of developing technology and structures, bridges represent an important part of the transport structure. Historically, bridges have been vital transportation routes, connecting communities and shortening routes across our world. As a major lifeline in the present time and modern cities, health monitoring of bridges becomes an essential task.

As bridges as a major investment for the society, there is a lot that goes behind the scene for its inspection and maintenance. It is very crucial to maintain the safety levels in bridges as any damage or failure can lead to a devastating loss of life and property. For this reason and more, Encardio-rite takes advantage of modern technology and their in-house manufacturing abilities to allow for accurate bridge monitoring.

In this article, we will be taking an in-depth look into Bogibeel Bridge monitoring work carried on by the Encardio team.

Let’s have a look!

Known as the second-longest Rail-cum-Road Bridge, the Bogibeel bridge spreads over the Brahmaputra River in the northeastern region of India. The 4.94 km bridge is built across Dhemaji and Dibrugarh districts of Assam, India and aims to reduce the train travel time between Delhi to Dibrugarh by about three hours. It will also provide direct connectivity from Dibrugarh to Itanagar, reducing the travel distance by 705km.

The Bogibeel Bridge is additionally recognised as the 5th longest bridge in India. 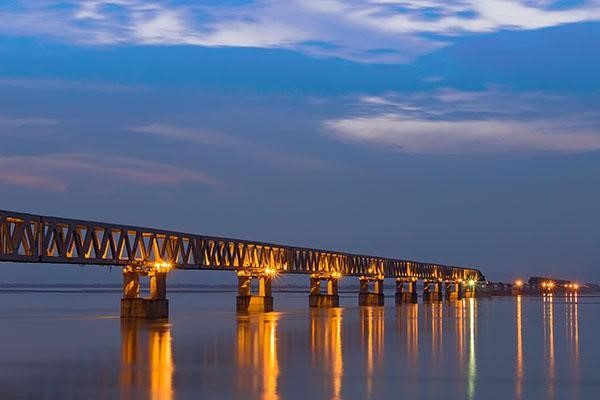 The Bridge is designed for the easy movement of transportation from Dhemaji to major hospitals, education institutes, and the Dibrugarh airport. It will also enhance the national security of the eastern region of India by providing a swift movement of the defence forces.

Since the Bogibeel Bridge is located in an earthquake zone, it is one of the first bridges to have a welded steel-concrete beams/trusses construction which holds the ability to withstand an earthquake of magnitude up to 7 on the Richter Scale.

The bridge is constructed as a two-lane rail track on the lower deck and the upper deck consists of three lanes. The bridge has been designed in such a way that it can easily transport army troops/tanks, and even fighter jet landings.

Why did Bogibeel Bridge need Monitoring?

Like any other structure, Bogibeel Bridge needed maintenance and monitoring work to ensure that everything was functioning as per the required level.

The bridge features a total of 39 spans of 125 m each along with 2 end spans of 32.4 m each. Among these spans, one normal span and one end span on the North bank needed a load test to gauge the over range capacity of the bridge.

The load test was carried during the commissioning stage of the bridge, where instrumentation was required for the real-time monitoring of the load test. Geotechnical instruments like Strain Gauges, displacement sensors, and thermocouples were employed for the testing of the strain developed at full load, and the variation of temperatures and displacement of the bearings of the bridge span.

Encardio-rite was responsible for the complete monitoring task of the Bogibeel Bridge.

Let’s take a look at the monitoring solutions provided by Encardio-rite and then move on to discuss the instruments installed by the team.

As mentioned in the previous section, load testing was required at a normal span of 125m and an end span of 32.4 m on the North bank.

The required geotechnical instruments were installed in order to collect the automated data before and after the load application. This was done to monitor the variations and load impact including the characteristics and responses of the bridge like temperature, displacement and geometry profiles of the bridge deck, static stress/strain distribution, and overall performance for the load test.

Here are the Turnkey Services provided by Encardio-rite:

Let’s take a look at the instrument used for the monitoring of the existing Bogibeel Bridge.

Strain Gauges were used for the strain measurement on the midpoints/endpoints of trusses as lower main chords, diagonals, and top cross girders. 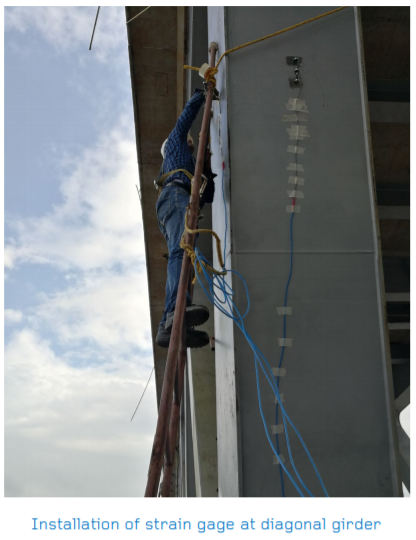 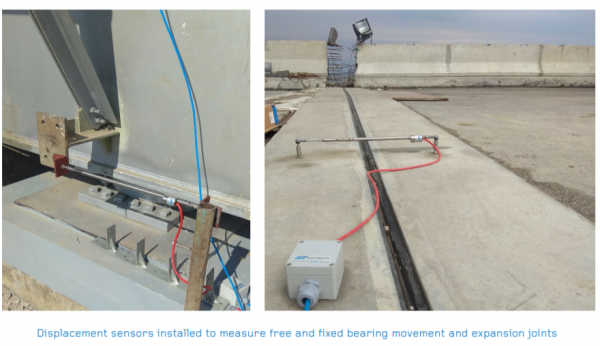 These were used for the accurate monitoring of displacement at the centre-line of bearing (fixed and free) and structural member of the truss as well as across the expansion joints between the two spans.

Prism Targets were employed for the reliable monitoring of the X-Y-Z movements on the picked lower main chords.

The geotechnical instrument was used for the measurement of the steel surface and concrete temperatures and was installed on the midpoints of trusses as lower and upper main chords. 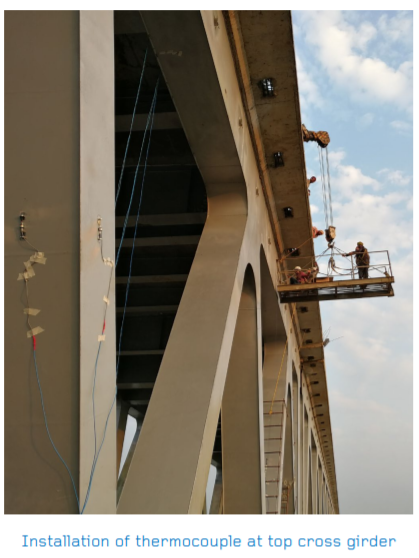 The Weather Station, as expected, was used to keep a look at the wind direction and speed, temperature, and humidity.

The System engaged in the automatic collection and transfer of the monitored data to the cloud server with web-based data management software.

The challenge was the enormous amount of groundwork the project demanded to achieve the results. 170 strain gauges, 124 thermocouples, 6 displacement sensors, and 8 prism targets were installed on the top cross girder mains and intermediate, diagonal girder, bottom chord girder of the normal span and end span. All this was done in a very short period, which was challenging.

Apart from this, the automatic weather station was installed at the centre of the normal span which was used to monitor the entire weather parameters. All the installed sensors, including the weather station were connected to an Automatic Data Acquisition system for real-time data.

Another installation challenge faced by the team was to install the arc weldable strain gauge without the welding as it was not allowed on the truss members. To do the needful, special epoxy was then used for the installation.

To install the displacement sensor at fixed and free bearing, above the pier of the bridge, a special arrangement was designed by the team. At the end of 10 days, the enormous task of installation, adaptation, and commissioning of over 300 sensors were successfully completed.

The Bogibeel Bridge Monitoring work was completed, and the span load test and monitoring results confirmed the assumption made before the test. As per the designers Ramboll the monitoring results matched the expected values, and no abnormality was found between the highway deck and the railway bridge.

A combined static load test including both highway and railway loadings was performed. The station load test was carried on in different categories, namely: 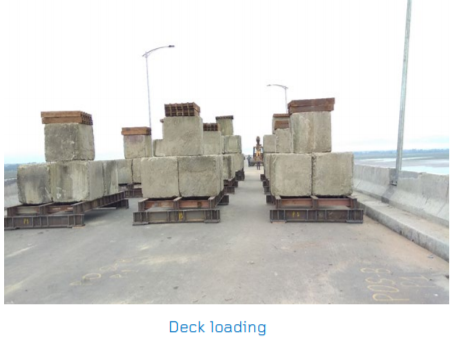 For the deck load tests, the loading was increased in a paced manner by placing concrete blocks and structural pieces on the structural frames at designated locations.

The difference in the strain distribution through the structure, displacement, and geometry profiles of the bridge and the ambient temperature, concrete temperature and steel temperature in the body was monitored through the loading and unloading, and the full load and no-load was observed for 24 hours.

Longitudinal displacement of the bearing and expansion joints were also monitored. 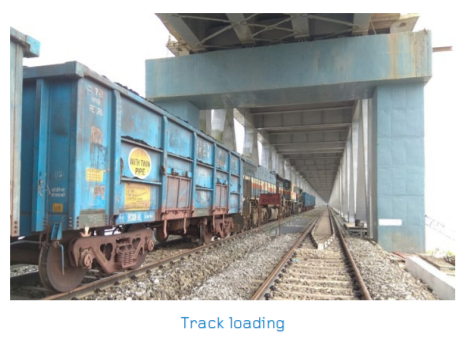 For the track load testing, the loads were provided in the type of the train engine and wagons. Apart from this, the loading procedure was similar to the deck load explained above. Similarly, all the instruments were installed on the steel structure, bearings, and expansion joints and monitored accordingly. 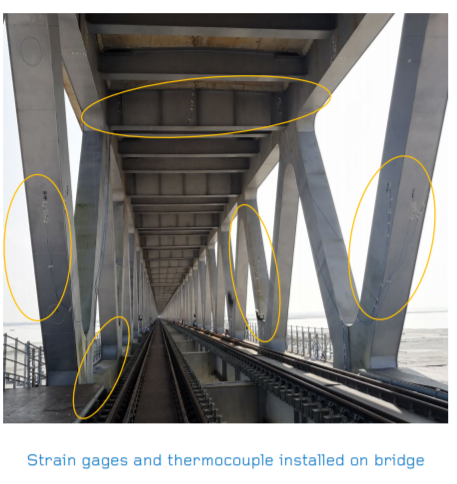 For the combined track and deck load testing, concrete blocks, engine with wagons, and steel structures were loaded on the railway track and highway deck simultaneously.

The load test was carried for two segments:

Encardio-rite’s Web-based data management software DRISHTI was used to monitor the real-time change in strain, displacement and temperature due to the incremental loads.

This brings us to the end of our case study article on Bogibeel Bridge. Watch this space for more such articles.